This Blog post may be somewhat controversial, but I really think it provides a viewpoint that I don’t normally see represented. I urge you to read the entire post before jumping to conclusions. Here goes:

I’ve read many a good post on estimating Agile projects, but I must admit the discussion about estimating via User Story Points versus User Story Hours seems to suffer from partisan politics. If someone believes in User Story Points, they paint the only alternative as a bleak Orwellian future of accounting for time in 5 minutes increments and shock therapy for the failure of missing estimates. They usually also assume that if you don’t buy in fully to User Story Points, you also don’t believe in Agile in general, Planning Poker, and are an avid fan of Waterfall. Nothing could be further from the truth.

What I would like to have is a bi-partisan discussion of the pros and cons of different estimating approaches.

Before I start I would like to state that I believe that User Stories, Planning Poker and Story Point Estimating should be done on each and every project. What I am discussing and proposing here is not about not doing Planning Poker and Story Point Estimating, but rather discussing whether the estimating should stop there or continue with other additional methods.

There is a continuum of approaches for estimating. This is illustrated in the diagram below: 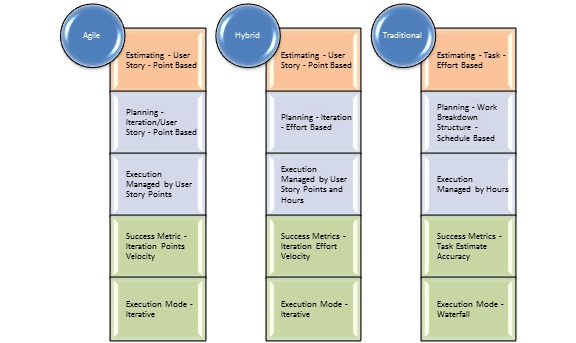 When discussing the pros and cons of Story Point Estimating, we are usually limiting our discussions to just the two extremes. I would like to propose a hybrid approach as well.

What are the pro and cons of each approach?

Perhaps the most important benefits of User Story Hours are that they allow for the derivation of a project budget and schedule. One of my biggest challenges with the User Story Points approach is the concept that it will take two or three iterations to determine your velocity and then you can inform your client when you can complete the project and how much it will cost. Very few projects I have been a part of can get a blank cheque for two or three iterations and then confirm if the project is feasible and has business value. User Story Hours still allows you to have that check at the end of each iteration AND also create an estimate at the start to ensure the budget and schedule satisfy the project’s business case. Although the estimate still is not ideal, it is better than not having an estimate at all.

And please stop saying that we shouldn’t estimate at all. Just stop, you are hurting innocent people. 🙂

I believe it is disingenuous to propose something as a principle that you know applies to a very small minority of projects. We need more ideas to bridge this reality gap of executing project in an Agile way and requiring project estimates up front to validate a business case.

I’ve read many posting on the perils of converting User Story Points to User Stories Hours and how a common conversion factor may not be feasible due to the difference confidence factors for each User Story size. I believe this is a red herring. The postings discuss how the conversion factor will be more of less accurate for different stories of different sizes. I couldn’t agree more. And it doesn’t matter.

All we are concerned with is if the conversion factor holds on average for the entire project. I’m not expecting it or requiring it to apply to individual estimates. I’m not holding individuals accountable for User Story Hours for each User Story, as I know these items will follow a Normal Distribution. (In fact the studies I have seen have prototypical Standard Distributions. An excellent post by Mike Treadway illustrating this can be found here: http://the-tread-way.blogspot.com/2011/04/how-many-hours-are-in-story-point.html)

In this example,converting to and using Estimated Story Point Hours results in an 11.3% difference between estimates and actuals. This is very much in line with the 10-15% project contingency commonly quoted. So it appears that this method is not introducing additional inaccuracy. Please note I am not saying you don’t continue to manage in an agile way monitoring velocity and adapting as you execute. But this would allow for a checkpoint before you start your project that your schedule and budget are feasible. Without this I fear we may give Agile a bad reputation by starting projects that should not have even been started because they did not satisfy the business case.

So given the fact that we need to convert to User Story Hours to validate the budget and schedule before we start, why wouldn’t we use them in addition to User Story Points as we manage iterations? I can’t think of any reason but I’d like to hear opposing viewpoints.

1)      The conversion to User Story Hours is done by the team and changes are only made by the team. There is no Project Management influence to modify the hours. This is absolutely critical.

2)      I’ve heard the comment that providing estimates in hours will affect the developers doing the User Stories and they may alter their behaviour and deliverables. I believe User Story Hours is merely another piece of information that developers should have when undertaking a story. I think having the User Story Hours will let the developer provide feedback immediately if the estimate is incorrect and allow for immediate adaptation. Otherwise we may only find out that our velocity is an issue a week into an iteration. Why wouldn’t we want to know if there are concerns immediately? Developers I have polled have stated they would like to know the initial hour estimate to be able to possibly raise a red flag early. They stated User Story Points do not allow this to be done as easily.

I think the benefits realized by developers knowing the initial estimates outweigh the dangers of the developers working to those estimates. A true Agile environment and team can allow User Story Hours to be used for good rather than evil.

Please let me know if you find this interesting and whether you would like to see a subsequent post on how you can convert from User Story Points to User Story Hours.