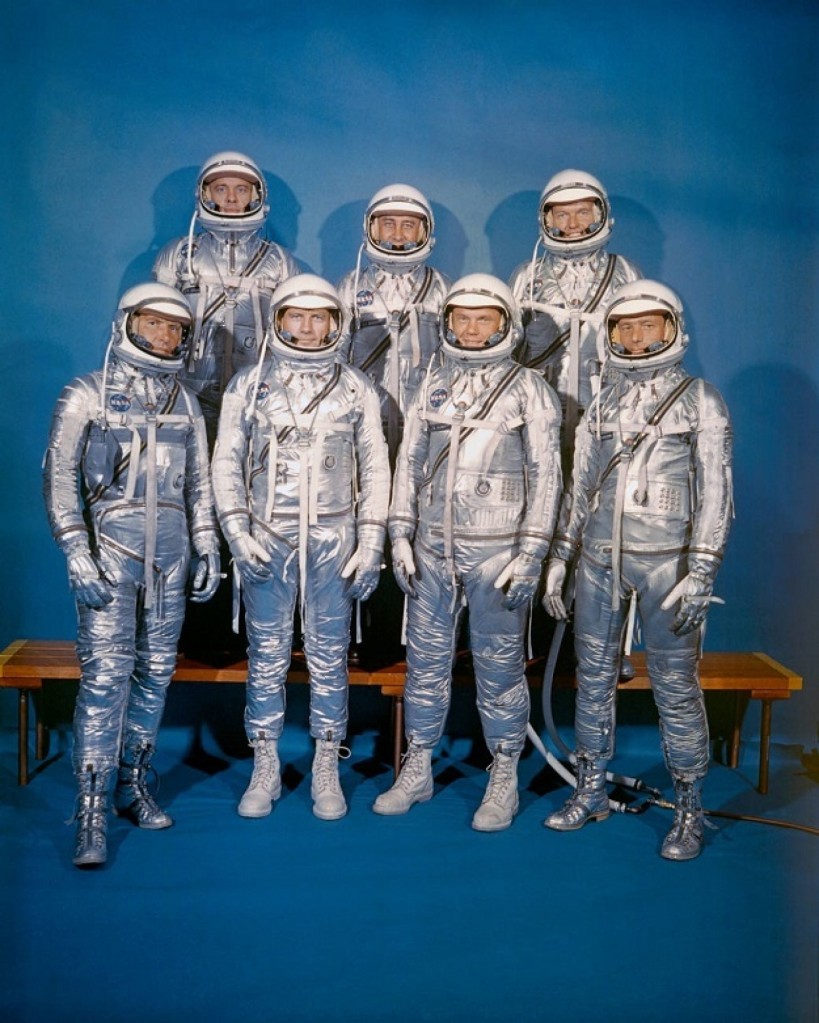 Kudos if you know the picture above is of the group of astronauts known as the Mercury Seven. Aptly described in an article in Life, the Mercury Seven were introduced to the American people as:

““Some fine early morning before another summer has come, one man chosen from the calmly intent seven . . . will embark on the greatest adventure man has ever dared to take. Dressed in an all-covering suit to protect him from explosive changes in pressure, strapped into a form-fitting couch to cushion him against the crushing forces of acceleration, surrounded in his tiny chamber by all manner of instruments designed to bring him safely home, he will catapult upward at the head of a rocket for more than 100 miles and then plunge down into the Atlantic Ocean. If he survives, he will be come the heroic symbol of a historic triumph; he will be the first American, perhaps the first man, to be rocketed into the dark stillness of space. If he does not survive, one of his six remaining comrades will go next.”

That is courage and bravery exemplified. Would we ever find the same qualities in 2017?

There have been many comments and critiques of the United States Government recently and they have been discussed thoroughly in the mainstream media. I would like to provide a different perspective to those discussions though. Of all the differences in the United States recently, I miss the courage and bravery. To this Canadian, the United States were always the brave soldier and Astronaut that in spite of undeniable odds would place themselves at risk for the greater good. Of course it was more safe to stay on the ground, but I’m going to sit on top of a rocket of liquid hydrogen because that is who we are as a people. The United States need to explore, advance, and progress. I loved the space program as a boy and I loved the United States.

I’m disappointed in the recent movement in the United States to close the borders because of fear. Take away all the 100% valid arguments about inclusiveness and racial and religious equality and I feel it still leaves one thing not discussed. I feel borders should be open for the same reason John Glenn got on the Mercury rocket – because it will benefit the world and the United States in the long run. Any protectionist ideology is a short-term tactic that damages the long-term health of the country or industry. I believe it is being done out of an irrational fear of a few people and what they might do. It is sacrificing the future gains of an inclusive society for a perceived short-term gain.

Unfortunately the same fear is also visible in my hometown of Winnipeg. Vincent Li committed a horrific crime when he was mentally ill. After many years of treatment and being evaluated as fully recovered, he was recently released and many were calling for him to not receive a full release and to continue to be monitored or have restrictions. In short, we are fearful of what he may do again. Yes, in the short-term we limit what Vince Li can do and it gives us the perception of being safer. So whom else do we limit freedoms to? And if we limit freedoms, maybe they should just stay in jail? And how would that limit our society in the future? Do we not discover a medical cure because the person was never part of society again? Do the lack of positive role models cause even greater issues with people suffering from mental health so that they are scared to seek help?

As Winston Churchill said “fear is a reaction, courage is a decision”

It is perfectly valid to experience fear in situations like these. But, we need to remember not to trade our future for our fears

More importantly we also need to remember that we as Canadians need to support others in their hour of need. Whether they be refugees or recovering from a major life event.

Because it is the right thing to do.